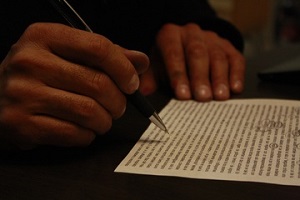 When it’s there in the flesh, we spend time with it, but when it’s not, what happens then? How do we spend our absences? When he was young, his dostlog would tell him, there would be a time when he would be in an asylum, as if that was going to be his final destination! If not that, suicide! At the time, he would think, it’s a joke—all one grand mazak. But now, after all these years, he is not so sure anymore. Perhaps it wasn’t a mazak. Perhaps he was indeed inching his way toward an asylum or headed for a suicide.

I loved Science, Stars, Nature, but then I loved people without knowing that people have long since divorced from nature. Our feelings are second handed. Our love is constructed. Our beliefs colored. Our originality valid through artificial art. It has become truly difficult to love without getting hurt. The value of a man was reduced to his immediate identity and nearest possibility. To a vote. To a number. To a thing. Never was a man treated as a mind. As a glorious thing made up of star dust. In every field, in studies, in streets, in politics, and in dying and living.

Past her eightieth year, badiammi’s words had become a web of tears. More tears than words. At least that’s what they sounded like. She didn’t speak. Only cried. And yet words came out submerged in the flow of her tears. Just as it happened that day. He was all ears and badiammi spoke on.

Badiammi had a brother. He hanged himself. Why no one knew. She was little then. When she opened the door, bhaijan was hanging from the fan. After that came all that fear! Fear everywhere! Anywhere! He had heard all these scary stories from badiammi. All his life. A lifetime of hearing. A lifetime of leaving. Today after a long while, in the flow of tears and words came out that old smell of older stories. Fear. Fear in walking towards the backyard in the night. Fear on the ghaats, fear near the water. Fear in the shade of the tree. Fear. Anywhere. Everywhere. Bhaijan’s rooh would come and possess her. What happened then? How was that time spent? When it’s there in the flesh, we spend time with it, but when it’s not, what happens then? How do we spend our absences?

Even badiammi had an ammi! She had already passed on. She would come too. She would come and ask bhaijan’srooh to leave. Bhaijan would want to take away badiammi but ammidida would resist. This went on for a whole year. He had grown up listening to this tale of good and evil roohs. But before today, he hadn’t realized that in the rooh of this story itself is buried, the idea of suicide. It is dafan in the story’s rooh. Today it seems to him that this story is not so much about ghosts as it is about suicide. But then again, how could his dostlog know about this story? He never told these tales to anyone outside his family. And yet they had all understood that one day, he too…?

In all these years, he has had many pictures clicked with his friends. Back then there were no smart phones, no social media. Analog cameras clicked pictures. First analog, then digital, he hardly saw any of those pictures! Perhaps they are all still there in his friends’ computers and albums! Perhaps they are not. Perhaps most of them are not. He never thought about these pictures. He met an old friend a few days back and why he didn’t know but he heard himself saying to him that he wanted to see all those pictures, taken with his friends. His friend said, he will try and see if that can be done.

For some time now, the man was reading a letter. A suicide letter. It read:

He was thinking about badiammi, ammidida, bhaijan. How many of them has he seen? How many has he not? He was thinking about good and bad roohs, about fears and about how to tell tales of suicide. To whom would he tell his tale? Who was listening? But fear, fear there was, all around! Only fear listening in to his stories! It’s a fear that wanted him to leave his place. He was as unwanted as those unseen pictures, taken for no reason at all! He was thinking if his friends would ever send him the pictures; thinking whether asylum and suicide were all one grand mazak or something else.

The man had a blade in his hands. When it’s there in the flesh, it cuts through. But what about our absences? How do the absences cut into us when we spend them?