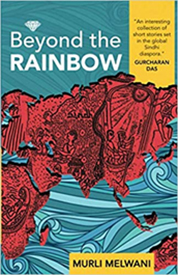 ‘A Mohenjodaro of Memories’

Writing about one’s own ethnicity and communities comes loaded with risks – the most important ones being a sense of complacency, an urge to glorify and validate community moorings and practices, sentimentality, nostalgia and – above all, stereotyping. The stories by Murli Melwani in Beyond the Rainbow – fascinating stories from the global Sindhi diaspora – are refreshing mainly because even though the stereotypes of the Sindhi community are worked skilfully into the narratives to give them firm grounding and to evoke a sense of familiarity and camaraderie, and also often to provide the touch of humour and irony, – there is never the sense of complacency. These charming and life affirming stories are the take-off points from which flows much introspection and pronounced strains of the satiric.

A fitting companion to his earlier volume, Ladders in the Sky, this volume comprises of eleven diverse stories which delve into various aspects of the lives of the protagonists who are all Hindu Sindhis; these are people who come alive as flaneurs, travellers, nomads and always on the go – in search of prosperity, wealth and a luxurious lifestyle for themselves and their families, making the leap from working as employees to establishing their own global businesses (‘the head of a chicken’), adapting themselves to the ways of living in various locations from Assam, Hongkong, Taiwan, the US, Mexico and various places with unpronounceable names.  Men who seek to control over their own destinies and ensure that they are the ones always in control on the family level as well as the business levels.  An almost outrageous case of this urge to exercise control is Hassaram in the story “The Mexican Girlfriend” who goes to great lengths to prevent the marriage of his son Ajay to Linette and murders her in cold blood when he realises that the couple have gone against his wishes. What makes this story even more exciting is the brilliant way in which this elderly businessman plans to trace the young couple and later on to escape from the US law machinery.

The men-protagonists are basically from the Sindhi community, and one cannot but admire the élan with which they deal with international clients and the painstakingly meticulous manner in which they inch their way to financial prosperity.  All the stories are moored in the culture and ethos of the Sindhi community though. Saaz Aggarwal, in her short but comprehensive Introduction to the book, contextualises them in the business acumen, their conservativeness, the loss of homeland and cultural roots in 1947, the travel propensity which has taken a miniscule community to almost every country in the world, and the tremendous adaptability which has ensured the survival of the community in challenging circumstances. ‘It’s not surprising that Murli’s stories can form a business manual’ while presenting ‘rich historical and anthropological insights’ also are remarkable for the ‘depth and quality of writing’ which makes them ‘not just enjoyable but notable works of fiction’, she states.

So, in almost every story we come across smart youngsters who grab a business opportunity when they see one, and go on to build fortunes in their adopted lands. Socially and professionally, they are malleable and flexible, learning the languages of the various countries they visit or in which they settle down, but they do not let go of their roots on the personal and familial levels. Which accounts for the fact that they make their annual pilgrimage to India in the quest for marriages arranged without losing sight of the financial implications and status (‘The Bhorwani Marriage’ for example), a traditional bride who cannot address her husband Metharam by his first name but has to use the formal ‘Heydaan’, and who will not be permitted to interfere with his business world and concerns.  It is not surprising that the women characters are suppressed and learn the hard way to keep within the boundaries prescribed for them.

Interesting titbits about the cultural positioning of the Sindhi women give insights into the coping strategies which they use into order to survive and help their families, in their search for a fulfilling life. Like in the case of the wife Rita in ‘Hongkong, Here I Come’ –, who has stood steady by the protagonist and followed his diktat, becomes his real strength when he has to start rebuilding his life again after the financial disaster overtakes them in Hongkong. Moreover, there are times when, in the middle of a narrative about the rising prosperity graph of the protagonist, Melwani can instill poignancy by the simple, though unexpected behaviour and insight of a woman. In ‘The Head of a Chicken’ when Vivek Ajwani telephones his aging mother to tell her that he is marrying a Chinese girl, her response is, “I will imagine that I have four daughters, instead of three. A daughter leaves her home; a son stays back to look after his widowed mother”. It is with such a startling turn of phrase that he brings home a whole load of emotion to the reader.  A fine sense of objectivity and authorial control serves to critique the self-importance and sometimes even pomposity that some of his characters may be victim to.

There could be a strong sense of affiliation of the author with the characters but that does not prevent him from keeping then under constant scrutiny, without being judgemental, neither making excuses for them nor valorising them, but by delving deep into their psyche and undercovering layers of emotion behind the successful, staid faces that are presented to the reader.

There is also satire which comes to the rescue, as Saaz Aggarwal shows in her Introduction, – the fine sense of humour and satire which is on full play in the choice of names in ‘The Bhorwani Marriage’ a spoof on the ostentatiousness of the community and the extravagances of the marriage market, which are accepted with a very practically outlook.

The non Sindhi women characters are stronger and more varied and the relationships with them expand the canvas of the narratives: there is the Chinese May Lin of “The Wok” chain of restaurants in Canada and her Indian antecedents; the girl Rok in ‘The Bar Girl’ who falls in love with the protagonist but marries someone else because he cannot bring himself to give up his family for her sake; and of course, Lily, the writer in ‘Writing a Fairy Tale’.

One of the most striking features of the Sindhi community which Murli Melwani highlights is the prevalence of strong family bonds and affiliations. Though the family forms the subterranean base in all the narratives there are some in which its importance is actually foregrounded. In the two stories mentioned above, the men make conscious choices, placing family and family responsibilities above all else and sacrificing personal, even human and romantic interests for the stability of the family; – is this is a marked trait of displaced communities,” I am led to wonder.

Again, there is a deep spirituality which is a vital part of the Sindhi ethos. So, it could be the Philip Roth-reading Tejwani, who takes the betrayal of his employees in his stride and moves on in life, and who is all forgiveness when he accidently meets Vivek at the airport, says to him, ‘After what you and the other boys did – after what you did – I decided to do the travelling myself. I said to myself, how much does a man need? He can eat only so much. He can wear only so much…’ Simplicity, austerity, penance and faith form the core of ‘The Turning Point’ in which the life of a child is turned around by the devotion of his parents and their attachment to the local gurdwara.

Beyond the Rainbow…, with the candid, spicy titles of its short stories, its eye for the miniscule detail, its sense of history and culture and the wonderful cover design by Veda Aggarwal which has every Sindhi icon from the ajrak to the ubiquitous diamond will be read by the Sindhis, I am sure with a chuckle and plenty of smiles. For the younger displaced Sindhis, it opens up a world which they would realise must not be allowed to disappear and links them with ‘a Mohenjodaro of memories’ and to drive home the urgency of the idea that ‘Our culture was like a puddle of water on a hotplate, effervescing and evaporating, vanishing’. For other readers Rainbow… offers a glimpse of a worldview beyond the ethnic stereotyping which often results in the tragic or farcical othering of complex, evolving cultures.