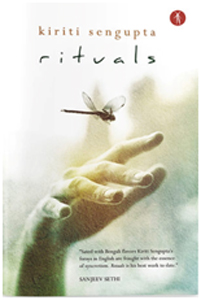 Introducing Rituals, the formidable poet Dustin Pickering writes, “Ritual, properly understood, signifies gratitude and is rooted in the habitual nature of the human organism.” Kiriti Sengupta’s collection of poetry is a search. What he is seeking through Rituals is not a disembodied spirit, but one with a distinct, beautiful form. The spirit is rituals itself. The poetry mesmerizes. Sengupta who has been awarded the Rabindranath Tagore Literary Prize 2018 for his contribution to literature, is a dental surgeon, poet, editor, translator, and publisher from Calcutta. He has several books to his credit, Healing Waters Floating Lamps, The Earthen Flute, Reflections on Salvation, The Unheard I, Solitary Stillness, Dreams of the Sacred and Ephemeral, being a few. Rituals are “manodharma” (manas, literally mind and dharma, is an exploration of the ethical within one’s being). Rituals (2019), Sengupta’s recent collection of poetry is an instrument of critical inquiry, also of life.

Comeback the opening poem of the collection, whispers “I return after a year…My tired eyes uncover the kohl of night, while my glasses spot tears” (17). This does not happen every day. It happens when there is emotion, when there is creativity. The lines are not a rigid structure: they allow the freedom to explore. The creative also implies the ethical. As one explores the poetical history of the form of Rituals - the technical detailing, melodic, textual and rhythmic intricacies and their histories, one realizes that none of these aspects of an art form can be divorced from the social, philosophical and political constructs that govern every interior poetical movement. The poet says, “Timing is crucial, to say the least” (Appraisal, 23). He wants to collapse the distinction between genres, questioning the politics of even the nomenclature. Thus, Sengupta freely writes, “Patrons do not frequent ageing accolades anymore…An appraiser is called out to rouse commendation” (25).

There is something called ethical art and that comes from working through the cobwebs of societal restrictions. Sengupta’s poetry exists within art forms and between art forms. Thus, when he thinks of an alternative view as “When God is a Woman,” he writes, “How many householders meet in / a whorehouse? / How many mujras dwell in a kotha? ... Like her admirers / God is silent / In her sinews / hides a hint of soil / from the yard of courtesans” (27). We are aware of the age old ritual of bringing in a palm full of soil from the household of the lesser daughters of Durga during the construction of idol of the Goddess. Thus, the poem is an attempt at exploration of the ethical that rituals (Rituals) are and a quest for equality. The poet has made an attempt to free the art. Gnosis must meet praxis. Art must be revisited—and reformed. So Sengupta has taken his poetry to the unlikeliest of places, the brothel. The poem is remarkably powerful and draws the attention of the readers to the rituals which we follow religiously.The poem is a metaphor for almost everything that is marginalised and neglected: spaces, people, and poetry.

Male speaks of a space that remains invisible, “I find myself connected / when my child says Baba. / Moments of intimacy surface / when my wife wants me to listen. / Mother makes sense / when she calls me son / Performing the last rites / adds to the legacy” (31). Language and culture conspire in such a way to maintain social hierarchies, thus by dedicating the book to the “Bauls” who practice the “other” form of music against the “classical” Sengupta is perhaps questioning the definitions such as “classical” or “folk.” This is also a kind of a ritual to pay homage to the wandering minstrels of rural Bengal. For the sensitive poet customs and rituals “are like mediation— / worthy of unhurried contemplation” (35).

In Rituals, the poet gravitates toward a subject that has a message in a subliminal way. In Timings, he writes, “It’s difficult to sever amity / even if it fails. / A new friend splits the bond faster. / Why do we hold stars / responsible for the rift? / Once in a while / it is crucial to get cornered. / That’s when I touch / the fiber of camaraderie.”  On the other hand the poem, Religion (49) brings us the true meaning of religion. The readers get into layers of this poem and it is definitely a richer experience. One absorbs a message from it which stays with us for days and weeks. This exactly is what Sengupta’s poetry can do, it weaves the kind of value that can be created. In today’s world it might be too pompous for a poet to claim that poetry can bring about a change. But one strongly believes that there are a sustained number of poems in this collection of poetry which speak about a certain issue and add value to it. In crisp lines the poet makes us realize the reality: “Relax! Bumps help us realize the earth” (53). Patience advises one to “ignore all coercions” for one has to remember that “Roots penetrate concrete / until they are excised” (55).

There is a strange naivety in the poem After the Book Fair. It speaks of a different kind of ritual. Once the book fair is over there is an inevitable relief, there is a routine cleaning up. The authors, the sellers, publishers store their books and look for a new venue. The poem speaks of the everyday mundane ritual which are a mixture of hope, restoration and conclusiveness. “From the shelves new hope will follow the merchandise” (91). Masala Muri illustrates how it is representative of the Indian culture and tradition. Sengupta recognizes that that this simple delicacy is of immense importance in the lives and lifestyles of people of Indian descent like him.  Through puffed rice (muri is a traditional Bengali snack) the Indian culture continues to be strong and vibrant. The poem embodies the representations of food, traditions, celebrating the rituals. The poet voices forth spiritedly the heartfelt emotions and experiences of the colourful Indian culture and ethos.

The poet then adds on to our experience: “Rituals do not add to our credos,” for “Indianness precedes theology.”  The experience becomes trans-national. Thus, identities are intimately connected to the concepts of cultural identity and nation. As Stuart Hall comments, identity is not as transparent or unproblematic. Perhaps, instead of thinking of identity as an already accomplished fact, which the new cultural practices then represent, Sengupta’s poetry insists that identity should be thought of as a “production” which is never complete, always in process, and always constituted within, representation. Cultural identity, in this sense, is a matter of becoming, as well as of being. It belongs to the future as well as to the past. It is not something which already exists, transcending place, time, history and culture. Cultural identities come from somewhere, have histories. But, like everything which is historical, they undergo constant transformation. Identities are the names we give to the different ways we are positioned by, and position ourselves within, the narratives of the past.

The final poem Exhibition reminds one of Shelley’s Ozymandias where the traveller finds a broken statue of  a legendary king of ancient time, lying forgotten in the desert, with these words carved on its base: “My name is Ozymandias, king of kings: Look on my works, ye Mighty, and despair!” Sengupta’s traveller finds that the various artefacts are missing their noses! The poet adopts a subtle way to deflate human pride. “I think of effigies with fractured noses / …Nature made the nasal frame fragile. / How do they breathe the vain air? (99). The poet reminds us that power is only temporary. Earthly power is mutable, and indeed all human beings need to remember this. There is no place of pride and arrogance in Nature.

In his search of life the poet seems to implore the spirit of rituals to appear. There is magic in his verses. The verses will surely make the readers explore their own rituals. Sengupta’s Rituals definitely add to the oeuvre of Indian poetry in English. The illustrations by Partha Pratim Das are an added embellishment to the collection of poetry.